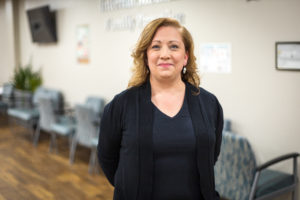 “Right place, right time” is part of Cathy “Kiki“ Backoff’s story, but it’s not the whole story. In October of 2019, Backoff was not feeling well. But she didn’t think it was anything too serious.

“As most moms do, I kind of put it off. I thought I was coming down with some kind of respiratory bug. I felt drained and was having trouble getting a full breath,” she remembered.

Throughout that week, she began to feel a bit worse, but carried on with her normal activities. By the end of the weekend, her health declined further. On Tuesday, October 22, her husband called their primary care provider, Dr. Adam Reyburn. The events that followed are still a blur to Backoff.

“She came in with the complaint of ‘just not feeling right,’” Dr. Reyburn explained. “When I saw her, she was pale and mildly tachycardic. Her symptoms were nonspecific, but concerning. We ordered lab work, chest X-ray, and an EKG to try and understand the cause of her symptoms.”

On the way out to the lab, Backoff and her husband walked through the waiting room and she asked to sit down for a second. And, that’s the last thing she remembers from that day. Dr. Reyburn recalled what happened.

“We ran out into the hall and, not feeling her pulse, we started CPR and supportive breathing,” Dr. Reyburn explained. “We quickly got her pulse back, started IV fluids, and called Adams County EMS.”

She was transferred by ambulance to the hospital. There, doctors continued to try to figure out the cause of her collapse. They determined she experienced a massive pulmonary embolism.

“When we figured out what was going on, the doctors were discussing my next steps,” Backoff said. “There was talk of open heart surgery, and the doctor there said I wasn’t stable enough to move.”

That’s when “right place, right time” would occur once again. QMG Cardiologist Dr. Adam Rafi was at the hospital for another patient and came in to consult with her.

“He said, ‘I’ll take her to the cath lab.’ If he wasn’t willing to take me as a patient and come in and see me, I don’t know what would have happened,” she explained. “I think back on that day, and if I wasn’t with Dr. Reyburn when I collapsed, I wouldn’t be here. Dr. Rafi was new to QMG, and he did these kind of procedures in Florida where he came from and he happened to be there. It’s just crazy how everything lined up.”

Also, there was Dr. Raymond Smith, with the QMG Oncology/Hematology team, and he met with Backoff while she was in the hospital. She recalls him praying with her sister and mom and how much that meant to them.

Almost a year and a half later, Backoff is doing great, but she often thinks of the three doctors who were in the right place at the right time.

“I’m sure Dr. Reyburn and Dr. Rafi helped save my life,” Backoff added. “And the fact that Dr. Smith took time out of his busy schedule to comfort and pray with my family also shows how QMG goes beyond for patients.”