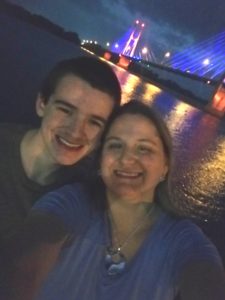 Every person is unique.   The same goes for a person living with autism.  Bringing awareness to this is important to Diana DeMoss.

Her son, Brady, is 16 years old and was diagnosed with autism at age 3. “I get asked often  ‘how severe is Brady’s autism?’  I don’t even know how to answer that question, but it’s probably the most common one I get,” she said.  “There is such a wide spectrum with autism, and there are a lot of similar aspects, but a lot of very different ones too.”

According to the Centers for Disease Control, autism affects an estimated 1 in 59 children in the United States today. Autism, or autism spectrum disorder (ASD), refers to a broad range of conditions characterized by challenges with social skills, repetitive behaviors, speech, and nonverbal communication.

Diana said because the spectrum of autism is so broad many people struggle to understand it. “I think there is definitely a misconception on what people perceive as the normal for autism.  You look at some of the movies or shows that are on, and they show these kids that are highly functional and have these special abilities.   It’s such a wide spectrum. They all have their own quirks, and if you don’t know them on a personal level, it’s hard to know what those quirks are for that individual. ”

When out in public with Brady, Diana said her experiences have been both positive and negative. She takes those opportunities to educate when she can, but doesn’t spend too much time dwelling on the negative.   “When they’re younger people see them as needing to be disciplined or think that they’re bad kids,” she shared.  “Just to look at a picture of Brady or another child with autism, you wouldn’t know.  People might say ‘why don’t you just discipline them?’  I wish it worked that way. And, for some kids, it may.  For Brady, sometimes it’s like he’s a 2-year-old in a 16-year-old’s body.   You can tell him no, but he won’t understand why it’s not ok.”

Practicing more compassion and less judgment is the advice she has for others.   “Some of my friends have said before they got to know Brady and me, they didn’t understand autism and just how prevalent it is.  It’s important to know when you see someone, and they’re acting a certain way, don’t pass judgment.  This goes for anything, not just autism.  If you see them out and you can offer any assistance, do that.  There might not be anything you can do, but knowing people are aware and understand means a lot.”

Being Brady’s mom is one of Diana’s proudest roles. She, along with her family, has learned a lot from him.  “He is very loving.  Seeing him with his brothers and how protective they are of him and their relationship is neat to watch.  He impacts everyone in the family, and I think it’s taught us how to be more compassionate toward others.”